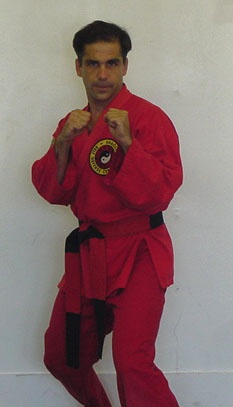 Shihan Ingargiola is a 9th Degree Black belt, in the art of Shaolin Kempo Karate. Which comes through the lineage of the following Martial Art Masters:

Shihan Ingargiola has been Teaching the Martial Arts for over 20 years, at his West Babylon, NY location. His Shaolin Kempo Karate System is a unique blend of traditional material and reactionary activities, which has been designed to give a well rounded experience. The curriculum is designed to constantly challenge the students physical and mental abilities, by using written tests along with the physical aspects for achieving New Belt Ranks. The System is highly regarded and sought after due to it’s high standards and thorough Curriculum, many Black Belts and Instructors from various styles have sought to be trained by Shihan Ingargiola for this reason.

His many accomplishments include a series of Belt Rank Videos based upon his Shaolin Kempo Karate System, these videos are available from any Shaolin Self Defense Center, or directly through our website and his Annual OPEN tournament held every November at the West Babylon High School which includes: Continuous Sparring, Self Defense, Weaponry, Kata and Breaking.

Mr. Ingargiola developed a device for helping learn focus and proper striking technique, called “The Strike Master”, He was also instrumental in developing a new child alarm system, called: “Kidd-pro-tek”, to help locate missing or abducted children. He also helped develop a computer program (TIA System). For running a martial art school, creating a paperless office system. In 1998, he has competed in full contact kickboxing matches; with a record of 9 wins, 1 loss, 1 draw, many of these matches appeared on cable-TV channels and as well as ESPN. He has had write-ups in several national Martial Art Magazines.

In 1999, Shihan Ingargiola was inducted into the “United Martial Artist Hall of Fame”for his contributions to the art of “Shaolin Kempo Karate” and was also placed on their evaluation board to evaluate future inductee’s. Shihan Ingargiola extended his record to 12 wins 2 loses and 1 draw during 1999 on November 19, 1999 at “Super fights IX” He ended his professional competing with an outstanding challenge. He agreed to fight in 2 matches back to back. The first fight was a 4 round full-contact kickboxing bout and the second match was a 8 minute submission grappling bout. Shihan Ingargiola won both of these matches, to a standing ovation from the sold out arena.

On November 19, 1999 he won the “Professional UKBA Welterweight NYS” Title Belt and the “Lightweight Grappling Submission” Championship. Competing in these 2 matches back to back with “no break” was a first in the Martial Arts World. Since retiring from competing professionally, Shihan Ingargiola still keeps his skills honed with daily training and keeps up on his progress of Shaolin Kempo Karate.

A Kempo Gathering was conducted in Cape Cod ,MA . The seminars went off quite well and the banquet was fantastic as well as the opportunity to train along with Master Jesse Dwire and Master Chris Hatch with Professor Kimo. Congratulations are in order to Master Jesse Dwire who was presented with his 5 th degree black belt at the start of the seminar day and I guess I should mention at this point that Professor Kimo along with Professor Nancy Cerio presented me with my 9 th degree black belt and named me the sole inheritor of his organization during the banquet. It is my privileged and honor to accept this from him and I hope to continue my Kempo learning and progression under his tutelage for many many years to come. Since becoming a certified Kickboxing Referee in 2005 and also recently expanding my Kickboxing floor space & schedule I also have been granted permission by the New York State Athletic Commission to run my own Kickboxing events.

Shihan Ingargiola understands that the bouts in the ring are not reality, but it is a great place to test the concepts of Shaolin Kempo Karate. A PLACE TO PUT THEORY INTO ACTION. Competing at such intense & high levels is not for everyone, but the regular Shaolin Kempo Karate student should feel quite excited that their art has been put to the test and has passed with flying colors.

Shihan Ingargiola entered the Open American National Karate Championship and won the Men’s Open fighting division as well as placing 2nd in Traditional Hand forms and 3 rd in Weapons . When asked why he decided to enter the tournament his answer was: “to quiz myself and see how my training has been progressing.” Congratulations to Shihan Ingargiola!! By the way his entire DVD collection is now available through Century Martial Arts Supply , the leading supplier of martial arts equipment and training aids in the entire country .

Sensei Kadir , a long term Shaolin Kempo student and personal student and friend of mine for many years won the ISKA Professional World Cruiserweight Kickboxing title by Knockout last night in San Jose , CA . Sensei Kadir is a 4th degree black belt and trains diligently all year long. On monday at 1:20 pm he found out he was fighting . On friday night he was in the ring by 10 pm. The action went back and forth with both fighters trying to gain the upperhand . Kadir landed an outstanding back kick in the 2nd round which dropped his opponent to his knees. Travis Johnson was able to rebound and came back with a vengenace.The action continued into the middle of the 6 th round , until Kadir caught Johnson with a straight right as Johnson was attacking . This sent Johnson back up against the ropes. Kadir followed with another right which landed just as effectively as the first one.Kadir faked another hard right and Johnson went for the fake and left himself exposed to Kadir’s legendary left hook . This was the last strike of the bout.

Congratulations to the Annual Kempo Challenge Tournament Committee/Team for putting on a great tournament this year as always a special thanks to Master Jason Kurdziel, Master Gerard Green, Master Kadir Kadri, Master Steven Castelli, Sensei Raymond Cooney, Sensei Brad Lemley, Sensei Michele Stein, Lori Cooney, Adam Ernst, Patrick Pigott and everyone else as well. Additionally, a special congratulatory mention to Master Steven Castelli and Master Kadir Kadri for achieving the rank of 5 th degree Black belt Master in the art of Kempo and for conducting the 1st annual Grapple fest together as well. Master Castelli was also named the Chief Instructor of the Babylon dojo this summer as well as graduating from Farmingdale University with his Bachelors Degree in Business Administration. We all look forward to an awesome 2008 with many exciting events planned. Such as Grandmaster Kimo of Hawaii visit this upcoming January 19th & 20th 2008 as well as more tournaments, kickboxing nights and grapple fests.