Kyoshi Steven Castelli is the chief instructor for Shaolin Self Defense Centers. 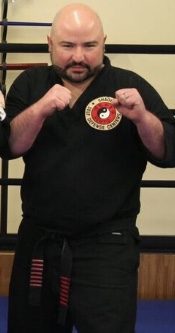 He currently holds a 7th Degree Black Belt in Shaolin Kempo Karate under his long term instructor Shihan Thomas R. Ingargiola. He has been studying under Shihan Ingargiola for over 20 years with over 10 years of teaching experience. Kyoshi Castelli has worked with many Masters around the world to improve his martial arts skills.

Besides the many trophies he has won in various martial art tournaments, Kyoshi Steven Castelli fought in many amateur kickboxing and grappling fights in out of the country. With fights in Long Island, NYC, New Jersey, Massachusetts, and Canada he has been able to improve even more as a martial artist with his experience from the ring. In 2005 he was inducted into the Action Martial Arts Hall of Fame for Male Competitor of the year. He also in September 2006 fought for Team USA against Team Canada and November 2006 fought for and won the amateur welterweight world title in kickboxing.

In 2005 he became part owner in the Shaolin Self Defense Centers West Babylon location. He presently practices and teaches martial arts daily.